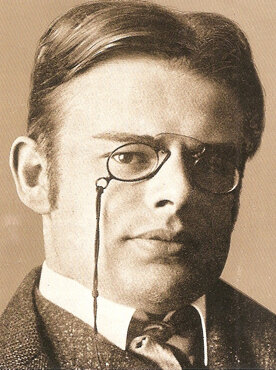 Haustein first attended the Kunst­gewerbes­chule (school of arts and crafts) in Dresden, then the one in Munich, where he also took courses in painting. In Munich he was not only able to publish designs in the magazine "Jugend"; there he also met the ceramist J. J. Scharvogel. He received a prize for his works exhibited at the 1903 World Exhibition. In the same year, he was appointed to the artists' colony in Darmstadt. Here he was able to contribute to the interior decoration for the Three House Group. In addition, several of Haustein’s designs for applied arts were shown at the 1904 exhibition. In Upper Hesse he introduced new forms into traditional pottery. In 1905, he began his 30-year teaching career at the Kunst­gewerbes­chule in Stuttgart. At times he also taught master classes at the Landesgewerbeamt (state trade office) in Nuremberg. At national and international exhibitions numerous works by Haustein were shown.