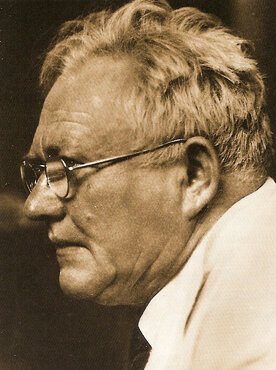 Jobst was trained as a sculptor in Munich, where he also had his first teaching position at the Kunst­gewerbes­chule (school of arts and crafts). Once he had been appointed to the artists’ colony in Darmstadt, he also received a teaching position at the Grand Ducal Teaching Studio for Applied Art. At the Hessian State Exhibition in 1908, he was not only represented with numerous objects; instead, he also worked together with the ceramic manufactory of J. J. Scharvogel on the Sprudelhof in Bad Nauheim shown in this exhibition. Several of Jobst’s works can be seen in the public space of Darmstadt, for example the lions at the entrance of the Hessian State Museum. His work includes monuments, sculptures and tomb sculptures, as well as portrait busts, medals and plaques.