The Wedding Tower was planned by Joseph Maria Olbrich for the third exhibition on the Mathildenhöhe, the “Hessian State Exhibition of Fine and Applied Arts”, and was completed in 1908. The building received this name on the occasion of the second marriage of Grand Duke Ernst Ludwig with Eleonore zu Solms-Hohensolms-Lich, in whose honour this landmark of the city was erected.

The tower consists of a wide plastered base with the entrance portal, the tall tower structure of dark clinker bricks with eccentric rows of windows at the corner and a crown of five pinnacles of dark glazed bricks.

In the tower measuring almost 50 metres, 209 steps lead to a viewing level. Below that level are, inter alia, the two princely rooms, which today are also used for weddings.

The Grand Duke’s room on the fourth level was furnished with a wall painting by Fritz Hegenbart. It shows the artistic departure into a new era. The Grand Duchess’s room on the fifth level contains a cycle of paintings by Philipp Otto Schäfer; it deals with the administrative districts of southern Hesse as well as with the wedding couple.

With its unconventional and simple form, the emphasis on the material of the outer shell, and the rows of windows at the corners, the architecture of the Darmstadt Wedding Tower already points to the Expressionist period.

The Wedding Tower has been completely preserved in its original state. During the bombing in 1944, only the roof of the five pinnacles was destroyed and later renewed.

To commemorate the second wedding of Grand Duke Ernst Ludwig with Eleonore von Solms-Hohensolms-Lich on February 2, 1905, the artists’ colony member Heinrich Jobst designed the sandstone relief above the portal of the Wedding Tower.

Framed by a fruit ornament, the coats of arms of the two houses of the bridal couple are juxtaposed in the lower part of the relief. They are accompanied by explanatory inscriptions: TO COMMEMORATE THE WEDDING OF TRH GRAND DUKE ERNST LUDWIG AND GRAND DUCHESS ELEONORE / ERECTED BY THE CITY OF DARMSTADT IN THE YEARS 1907–1908. In the background, a laurel tree spreads its branches. In the upper zone, placed on small ornate pedestals, four virtues of good rule are presented with their attributes: STRENGTH AND WISDOM with lion and owl, JUSTICE AND LENIENCY with scales and a crouching person at their feet (as a sign of just but lenient judgements). In the centre one can read the year of the wedding: ANNO 1905.

On the north side, the mosaic "The Kiss" or "The Faithfulness" shows a naked young couple lying and facing each other, connected in an intimate kiss. The ideal bodies are exalted by their large, upwardly pointed wings, behind which there is a circle of stars. Bedded on stylised golden roses, the young couple in their symmetrical arrangement symbolise absolute harmony.

On the opposite wall, the mosaic painting "Fortuna" shows the figure of the goddess of luck in a slightly flowing garment. White doves fly from her two cornucopias, carrying red roses into the world as a sign of love.

These two opposite wall mosaics are complemented by a barrel vault with a gilded surface to which black stars were applied.

In 1914, Albin Müller designed a large gold-plated clock as a bas-relief for the north side of the tower, below the row of windows at the level of the viewing level. The black hands and numerals stand out clearly against the bright golden surface. This almost square zone is flanked by two upright golden torches. The lower space in between is decorated with cross, flaming heart and anchor, the symbols of faith, love and hope.

The mosaic of a sundial, designed by Friedrich Wilhelm Kleukens in 1914, glitters in fine weather on the narrow south side at medium height. The yellow rays on a white ground are the background for the clock hand, which in sunshine casts its shadow on the numerals of the almost square field. Set in medallions, twelve zodiac signs form a frame with a stylised starry sky in dark blue. The sun for the day and the stars for the night refer to the poem by Rudolf Binding (1867–1938) below. A rectangular window is set in place of the middle verse:

The day wanders across my face
The night quietly glides on by
And day and night in balance
and night and day all the same.

The day writes the dark writing,
and darker still she writes the night
And no one lives who can interpret
what both shadows have brought him. 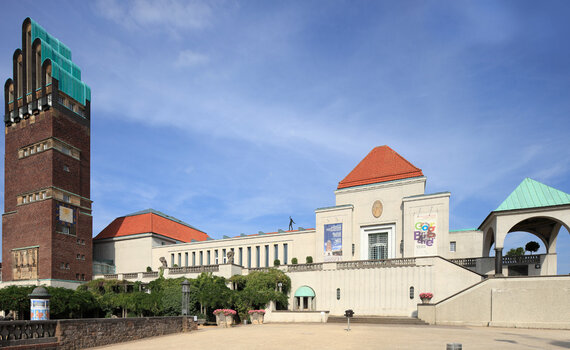 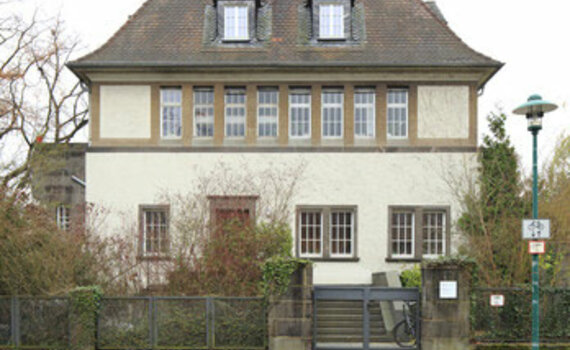