As the central building of the 1901 exhibition, Joseph Maria Olbrich designed the Studio Building of the artists’ colony at the highest point of the area. Its front consists of a broad structure of clear forms and a richly ornamented monumental portal.

The south-facing facade with its smooth white surfaces is topped by a projecting mono-pitch roof. The flat-roofed wing in front, which extends up to the studio level, has south-facing windows that point to the entrances to the individual workroom segments. The raised blind gables on the sides are designed as simple plaster surfaces, the upper edge of which swings down in a bold line to the north onto the studio roof below. On the north side of the building, a series of large studio windows are set into the roof area for purely functional purposes, providing glare-free light for the artists' workspaces.

In contrast to the clear architecture of the Studio Building, the richly decorated portal with its striking omega arch, the gilding and the bronze geniuses of victory by Rudolf Bosselt, as well as the larger-than-life portal figures "Power" and "Beauty" by the sculptor Ludwig Habich, are effectively staged.

The foyer with its music gallery, located in the centre of the Ernst Ludwig House, served as a hall for celebrations and meetings, while the wings housed the artists' studios, each with four sections. In addition to the utility rooms, there were also two apartments for artists of the colony on the base level.

There were losses due to the Second World War, especially inside the building, while the southern facade and the large portal have been preserved. The former Studio Building is now used as the Artists’ Colony Museum, where works by the 23 members of the Darmstadt artists' colony are shown. 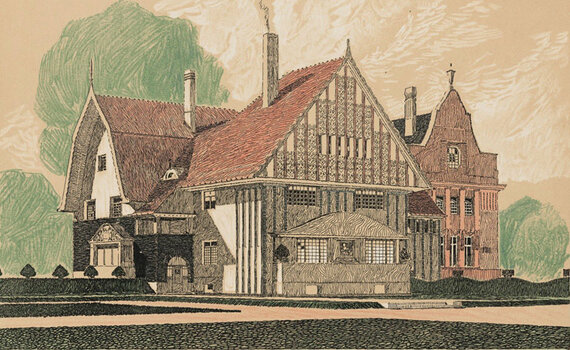 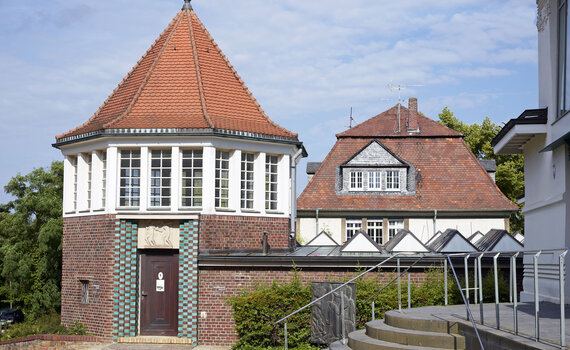