For the second exhibition of the artists' colony at the Mathildenhöhe in 1904, Joseph Maria Olbrich designed an octagonal extension with connecting wing for the Studio Building erected in 1901. As a structural extension, it provided workspace for two sculptors, each with a separate entrance, as well as a small studio in the octagon. Clearly visible are the rows of skylights for the lighting of the workspaces. In front of the two studios in the east is the sculpture courtyard, surrounded by masonry with clinker pilaster strips and light-coloured plaster surfaces.

The large wooden gate is suitable for a transport trolley; rails were laid all the way into the studio space for this purpose. Inside there is still a pulley attached to a steel girder; it was suitable to move the stone blocks. The steel girder has been preserved, only the rails were removed as they caused rainwater to flow into the space now used for exhibitions. An exposed iron girder visible from the outside and used as a lintel emphasises the functionality of the architecture.

The tower-like octagon with brick-red tented roof is also built of dark brown clinker brick. A staggered entrance made of raw and green-glazed clinker bricks is one of the few decorative elements of the almost unornamental building. The sopraporta “Daphne and Apollo” above the entrance is a sandstone relief designed by Heinrich Jobst who worked in these rooms from 1907 to 1943.

The building, completely preserved except for the roof, is today partly used as a gift shop and, together with the other rooms, for exhibitions. 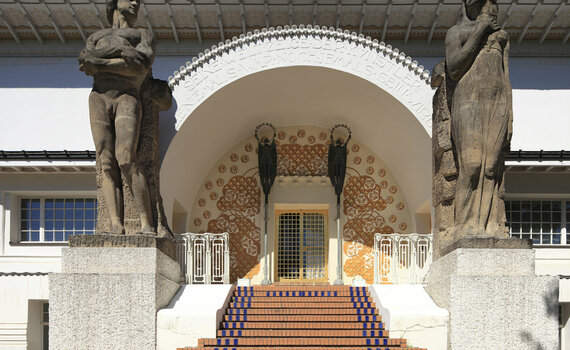 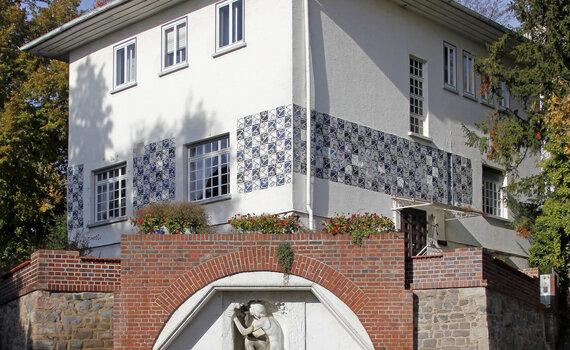