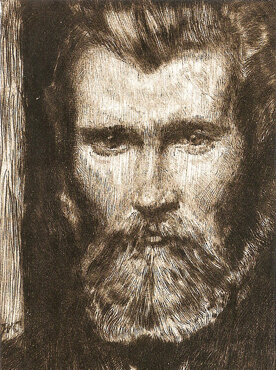 Cissarz studied painting at the academy in Dresden and became known primarily for his poster designs. As a member of the artists' colony in Darmstadt from 1903 to 1906, he participated with designs for the interior decoration of the Three House Group, but also with poster and graphic design. After he had been appointed as a lecturer at the academy in Stuttgart, book design became his most important field of activity. From 1916 until his retirement he taught painting at the Frankfurt Kunst­gewerbes­chule (school of arts and crafts). He received numerous commissions from renowned publishing houses such as Diederichs, Callwey, Cotta and A. Koch and was able to publish a pattern book for the printing trade under the title "Cissarz-Ornament".