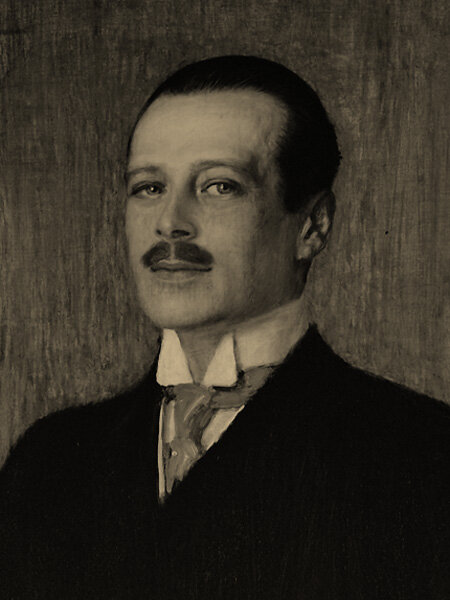 Ernst Ludwig, Grand Duke of Hesse and by Rhine

Grand Duke Ernst Ludwig of Hesse and by Rhine, who was appointed heir to the throne at the age of 23, received basic military training before he was able to begin his law studies in Leipzig. Until the death of his father, Grand Duke Ludwig IV, he was trained as an officer in Potsdam. In 1894 he married Princess Victoria Melita of Saxe-Coburg and Gotha, and in 1905 his second wife, Princess Eleonore zu Solms-Hohensolms-Lich. Ernst Ludwig was interested in music, theatre and dance. He appointed Alfred Messel as architect of the new building of the Hessian State Museum in Darmstadt. In England, he became acquainted with the ideas of the Arts and Crafts artists and founded the Darmstadt artists' colony on the Mathildenhöhe together with the publisher Alexander Koch. When the "People's State of Hesse" was proclaimed in 1918, Ernst Ludwig was allowed to continue living with his family in his Darmstadt palace. His summer residence, Schloss Wolfs­garten, also remained in his possession.