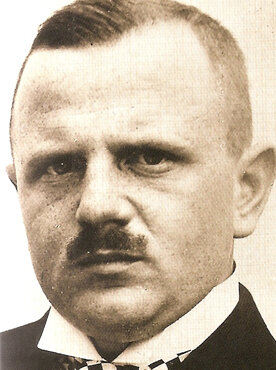 After completing his carpentry apprenticeship, Emanuel Josef Margold attended the Kunst­gewerbes­chule (school of arts and crafts) in Mainz and then the Academy of Fine Arts in Vienna. As assistant of Josef Hoffmann Margold worked at the Wiener Werkstätte before he accepted a post at the Darmstadt artists' colony in 1911. Here he designed several temporary buildings for the Artists’ Colony Exhibition in 1914 and was also commissioned to design the interiors for the group of tenement houses. Margold was also represented with designs for the Werkbund exhibition of 1914 in Cologne. Furthermore, his works were shown in Leipzig. The biscuit tins for the Bahlsen company, some of which were designed together with his wife Ella Margold, show the influences of his years in Vienna. After a two-year service as a soldier in World War I, Margold returned to Darmstadt to carry out private commissions as a designer. From 1929 Margold lived in Berlin, where he was mainly active as an architect.