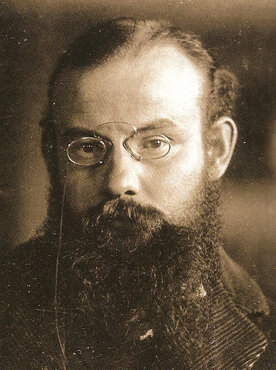 Coming from a preacher family with many children, Greiner first studied philosophy and theology in Giessen, before taking up a position as a clergyman in Schotten. Soon, however, his interest turned exclusively to becoming an artist. He attended the Paris Academy and trained as a sculptor in Berlin. In 1903, Greiner’s works were shown at the Darmstadt Kunsthalle, and in the same year he was able to become a member of the artists’ colony. In 1906, he moved with his family to Jugenheim an der Bergstrasse, where he founded the " Werkstätte für Grabma­lkunst Greiner und Guth“ (workshop for gravestone art) and also his own publishing house for the publication of his graphic works. As a member of the KPD (Communist Party of Germany), for which at times he had also been a member of the state parliament, he and his large family suffered from poverty and artistic isolation during the National Socialist regime.